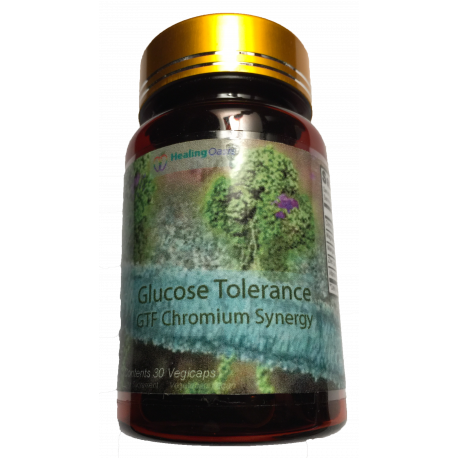 Chromium is the only essential mineral that your body cannot conserve. The kidneys selectively reabsorb all the others.

Chromium is also the first to be lost to food processing.

Those factors combine to make Chromium and important mineral to supplement and replete for many in our culture.

​The active cofactor and preferred supplement form of Chromium is called Glucose Tolerance Factor (GTF) Chromium. It's identity as a chemical compound is Chromium Polynicotinate, where Poly means many and Nicotinate refers to Vitamin B3, which is also known as Niacin or Nicotinic Acid.

Besides Vitamin B3, other known nutritional synergists of Chromium are:

Magnesium, which we include as Magnesium Threonate, which is the only form of Magnesium delivered to the Brain, across the Blood-Brain Barrier

Manganese, which we supply as Manganese Glycinate, a highly bioavailable amino acid chelate

Zinc, which we include as Zinc Picolinate (the pancreas produces Picolinic Acid to increase Zinc absorption)

Vitamin B15, which is supplied as Trimethylglycine (TMG) from Beta vulgaris (beets), which is our best methyl donor which tremendously boosts oxidative respiration in the cells.

Vitamin B15 (as Trimethylglycine from Beta vulgaris) 40 mg *

Apply for a Consultation...

Your Payment Is Secure